Grand Master Moran
Sharp Shooter Keychains,It is like 3 devices in one!
Hi I am Grand master Moran I Am Here To Share My Best Patented Products with You on Etsy!

My name is Robert Moran, and I’m the creator of the Sharp Shooter Keychain.

I wanted to give my friends and family an out, if they ever were faced with immediate need to survive. I’m not naive enough to think that my loved ones will be safe no matter what. Grand Master Moran Read More...

P.S. The #1 reason why people get attacked in the streets, is because they KNOW they can’t defend themselves, and thugs and gangsters pick up on that. These people only attack those who are weak.

With the Sharp Shooter Keychain, you will be STRONG, and capable of immediately defending yourself, and whoever else is around.

The Sharp Shooter Keychain is incredibly easy to use, and most importantly, it will come as a major surprise to anyone who wants to do you harm. It’s a favorite of all who use it because, You can instantly deliver a disabling, defensive strike! 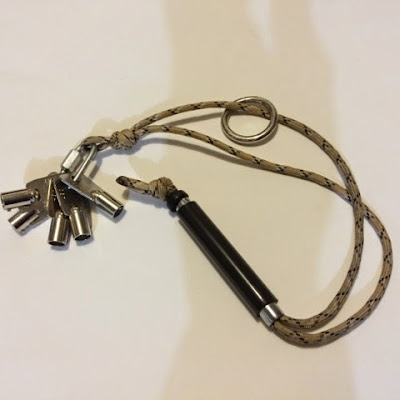 I saw a cool impact weapon in one of my feeds, and got in touch with its creator, Karate Master Robert Moran,  to see if I could try one out. Master Moran was kind enough to send me one, and I've carried it in my pocket for some time now, and can give you my thoughts. This is the SharpShooter keychain and what I can tell you about it.The keychain consists of four distinct components. The core element is the paracord that runs through the center. This is doubled up and serves as the main conduit for the Sharp Shooter's action. 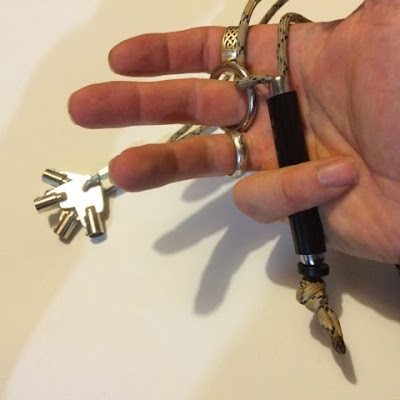 Knotted at one end, a length of steel tubing, covered in a silicone sleeve for grip is set up to run freely, apart from a silicone gasket, which pins it in place as a friction lock.A steel o-ring is looped into the main paracord loop and is used as the retention system for the keychain, and its as easy to use as wearing a ring. Being free-floating the ring and the steel tube can slide freely. The last component is the keychain component, which features a steel oval screw link as you might find in climbing or in boating. It holds your keys in a nice tight bunch, ready to open your doors, or perhaps offer a face-full of "please unhand me, uncouth ruffian" as needed. 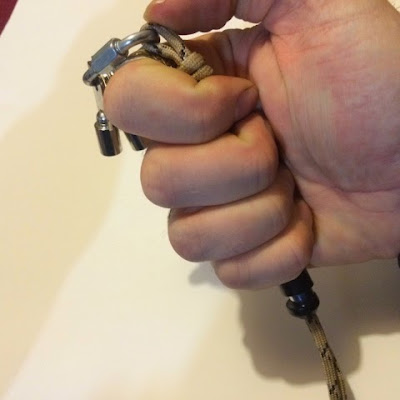 The idea of the keychain is to offer an alternate means of carrying your keys as well as offering a flexible weapon, that unobtrusively sits in your pocket or purse. Master Moran offers an instructional DVD as well as on-site training at his Dojo. The tool works by cinching up the pipe all the way to the top of the knot, up near the screw-link, and by slipping the toggle back, you can transition from a downward strike with the pipe as a pressure point tool, but which a flick of the wrist, you can "shoot" out the keys, to form an impromptu flail or mace. 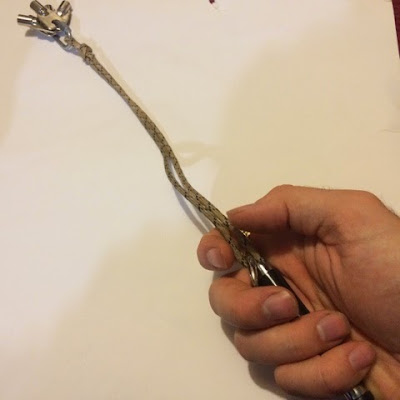 The ring keeps it secure and locked into your grip, but subtly enough that it certainly doesn't LOOK like you have anything other than a set of keys dangling over your knuckles. I have tried the flick and swipe techniques, and the strikes with the pipe piece a couple of times, on a couple of different materials, and with some of the techniques I remember being shown by Sensei Guest at a Bujinkan winter camp in flexible weapons, I could see how this could give you a very game-changing strike in a last-ditch self defense situation. I'd suggest you check your local concealed weapons laws, but if you fancy adding a little something to your EDC to give you an edge, that doesn't raise a lot of eyebrows, for the otherwise noncombative members of your family, this might well be something to look into.
You might also like:

Check Out My Other Videos

How to Block a Bitch Slap

Full List of Filming, Camping, Survival Gear for 10 Days, 10 Items, Alone on an Island in the Wild

Camping in the Woods

Why Did You Give Up - or - How Did You Make Your Dream A Reality? - Motivational Video 2018

The Time I Went to Tampa General Hospital